The Bahá’í Community in the Northwest Territories

The Bahá’í Faith was first established in the District of Franklin of the Northwest Territories in the early 1950s by a Bahá’í anthropology student who was working on a summer job taking palm prints of Inuit in the Arctic. The Inuit later named him Itimak which means palm of the hand. He introduced the principles and teachings of Bahá’u’lláh to an Inuit man in Coral Harbour who expressed keen interest and offered to translate these teachings into syllabics so that all the Inuit in his community would know about the principles that could bring diverse peoples together to build one human family. He was the first Inuit man to accept the Bahá’í Faith in the NWT.

After the 1960s, a few Bahá’í families settled in small remote and a few larger NWT communities. Northern peoples of all cultural backgrounds and demographics began to investigate the Bahá’í Faith and Bahá’í activities from stimulated the growth of the Faith. During these early days, the first female Inuvialuit woman entered the Bahá’í Faith in 1965 and Dene and Metis people, curious as to what the Bahá’ís believed, began to enrol in their communities in the NWT. The 1960s was a time of firsts - the first South Slavey Dene person became a Bahá’í in Hay River and the first Chipewyan/Metis Bahá’í declared in Yellowknife. During the 1970s and onward further Dene, Metis, Inuvialuit and Inuit people across the NWT enrolled. Bahá’í friends, although small in number, supported each other at regional summer schools and communities like Hay River and Yellowknife became hubs for Bahá’ís travelling to and from more remote northern communities.

In 1999 the map of Canada was re-drawn which divided the vast northern territory into the NWT and Nunavut to recognize the homeland of their distinct Aboriginal peoples. First Nations, Dene, Metis and Inuvaluit in the Northwest Territories and the Inuit in Nunavut began to take steps to govern their affairs based on their determined needs. Although the NWT divided into two territories, the Bahá’ís in the NWT and Nunavut depended upon each other for encouragement and sustaining their growth.

In 1999, the Bahá’ís in the NWT decided that, out of respect for the Indigenous people, it would embark on a Dene Bahá’ís CD project to engage highly respected local Dene and Metis Dene people to translate Bahá’u’lláh’s teachings and prayers so that, for the first time in their lives, these people could hear these teachings and prayers spoken by their people in their six distinct languages on a CD. Dene Bahá’ís and community members worked together to present the Dene Bahá’ís CD as a gift to all of the Indigenous peoples in communities throughout the NWT. While people played these in their homes, offices, and in schools, the Bahá’ís also were asked to offer a course on the spiritual dimension of life through the Ruhi study courses to two intakes of Dene people who were part of the Grollier Hall Residential School Healing Program.

Since that first offering of the Ruhi study courses to the public, increasing numbers of people throughout the current NWT population have been finding inspiration and guidance from these teachings. In Yellowknife, the capital of the NWT, and in regional centres like Hay River, Fort Smith and Inuvik, Bahá’í community members are working together with their neighbors and friends to promote and contribute to the well-being and progress of society.

The Bahá’ís and their growing numbers of friends offer opportunities to study and reflect upon spiritual topics, arrange meetings for communal worship, and provide classes for children and youth, emphasizing moral education. The devotional gatherings, study classes, children and youth programs are open to all.

The Bahá’í Community in Nunavut

In 1999, the map of Canada was redrawn and two northern territories emerged where formerly there had been one. The Bahá’í communities of the Northwest Territories and Nunavut share a history which continues as a warm and supportive relationship today.

The development of the Bahá’í Faith in Nunavut begins with a distinct reference in a letter written in 1916 by ‘Abdu’l-Bahá. Addressed to the small emerging Bahá’í community of Canada, the letter referred to the Inuit, recognizing their spiritual capacity that, when nurtured, would have a “great and far-reaching effect”.

Around 1950, Jameson Bond, a student working summers in the North, became the first person to share the Bahá’í Faith with the residents of the region that became Nunavut. From 1953 to 1963, Jameson and his wife Gale lived in Arctic Bay, Cambridge Bay and Pond Inlet where they lived in close friendship with the Inuit and shared the Bahá’í teachings of unity of all peoples and religions with those who asked. Since then, Bahá’ís have traveled from Southern locations and other Arctic communities, sharing and celebrating the Bahá’í teachings across the territory.

In the late 1960s, two Bahá’í Houses – one in Baker Lake and one in Iqaluit – further helped support the growth of the Bahá’í community. These houses offer a centre for spiritual and social gatherings that enrich healthy and joyful community experiences. Caretakers of the Bahá’í Houses reach out to the public with service-oriented activities for children, junior youth, youth, parents, elders and other members of society. Amongst many activities is a special historical conference. The Spirit North conference, which was held in Iqaluit in 1986, gathered Indigenous Bahá’ís from across the circumpolar North with a distinguished guest, Amatu’l Bahá Ruhiyyih Khanum.

Like Bahá’ís throughout Canada and across the world, Nunavut Bahá’ís join closely with their fellow-citizens from diverse cultural and ethnic backgrounds, working together on developing spiritual, healthy and vibrant communities through activities that are open to all including: collective gatherings for prayer; study circles reflecting on spiritual topics and the sacred scriptures of the Bahá’í Faith; as well as classes for children and groups for junior youth, emphasizing the expression of moral principles through community service projects.

The Nunavut Bahá’í community is ensuring that an ever-expanding source of prayers and original Bahá’í writings by translating them into Inuktitut so that all members of the communities have access to these messages. In one community, an Inuktitut and English Bahá’í radio program for the public shares uplifting prayers, writings and music and explores common spiritual topics and the connection between the Bahá’í Faith, Christianity and other religions.

Regular teleconference calls connect Bahá’ís from several communities in Nunavut to share devotions, reflect and consult together on the development of their communities. On special occasions, these calls include Bahá’ís from Greenland, the Northwest Territories, the Yukon, Alaska and points across Southern Canada and the USA, and are held in English, Inuktitut, Kalaallisut (the language of Inuit of Greenland), and Danish.

The Bahá’í Community in the Yukon

The Bahá’í Faith was introduced to the Yukon in the 1950s with the arrival of Ted and Joan Anderson. They established an organization called the Indian Advancement Association for Indigenous people, which later was changed to the Native Brotherhood and Yukon Association of Non-status Indians. Many of the early Bahá’ís in the Yukon were Indigenous elders. In addition to contributing to the growth and development of the Bahá’í community in the Yukon, these Bahá’ís also significantly contributed to the revitalization of the Indigenous cultures and language of the Yukon. There are significant Bahá’í communities in Tagish, Carcross, and Whitehorse, and Local Spiritual Assemblies in nine localities. In Whitehorse, the capital of the Yukon, Bahá’í community members are working together with their neighbours and friends to promote and contribute to the well-being and progress of society. The Bahá’ís and their growing numbers of friends offer opportunities to study and reflect upon spiritual topics, arrange meetings for communal worship, and provide classes for children and youth, emphasizing moral education. 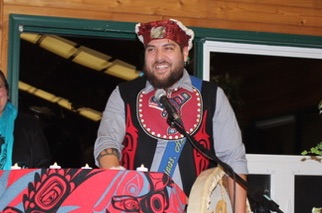 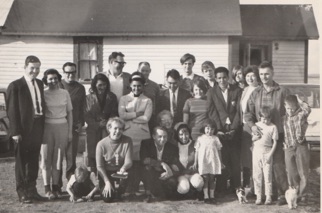 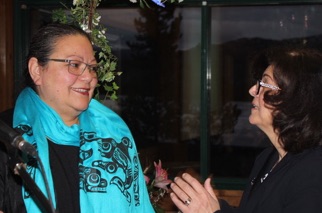