The Bahá’í Faith has flourished in Canada since arriving in 1898. This is partly explained by how close some of the core Bahá’í principles are to values in Canadian culture, such as unity and fairness, equity and justice, the importance of the rule of law, the equality of women and men, and the central place of education.

There has been an intimate relationship between Canada and the Bahá’í Faith for more than a century. In 1912, ‘Abdu’l-Bahá – the son of Bahá’u’lláh and head of the Bahá’í Faith from 1893 to 1921 – visited Montréal for nine days, speaking to thousands of people of all backgrounds, on subjects ranging from economics to the oneness of religion. He was hosted by May and William Sutherland Maxwell, and their former residence is now considered a Bahá’í Shrine — the only one in the Western hemisphere.

Bahá’ís now live in every province and territory, residing in over a thousand Canadian localities. The Bahá’í community has emerged from its relative obscurity, gradually becoming more able to contribute to the well-being of Canada and the world. Canada’s future will be glorious, Bahá’ís are convinced, but it will take immense effort by all who live in this land if we are to continue to advance the project that is Canada, by redeeming the injustices suffered by the Indigenous peoples of this land, overcoming the distance that remains between the French- and English-speaking cultures, and creating a country that is united, peaceful, and prosperous.

This country can become a reflection of the unity and harmony of humankind that lies at the heart of Bahá’u’lláh’s Revelation, which Bahá’ís take to be the most recent expression of God’s will for humanity. Few countries have such a representative population of humanity living within its borders. Few countries can reflect so well the oneness of humanity that is at the heart of Bahá’í teachings. That consciousness of the unity of the human family is a part of the core values Canada claims as her own. Little wonder that Bahá’ís in Canada have for more than a century been so attached to this country, whether born here or newly arrived. 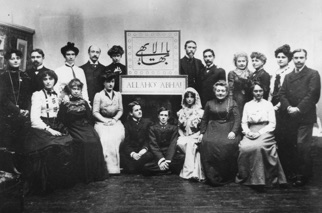 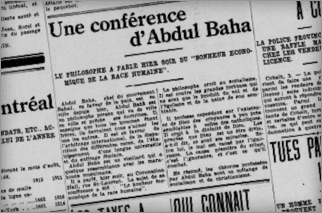 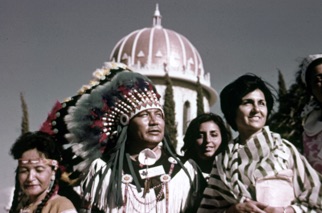 Figures from the early days of the Canadian Bahá’í Community

The Canadian Bahá’í community received a strong and sustained impulse for its growth from a visit of ‘Abdu’l-Bahá – an impulse carried and reinforced by many of the early believers in the country.

Visit of ‘Abdu’l-Bahá to Canada

‘Abdu’l-Bahá was the son of Bahá’u’lláh and appointed head of the Bahá’í Faith after his passing in 1892. In 1910, he embarked on a journey lasting three years through Egypt, Europe and North America to spread the Bahá’í Faith. He visited Montréal in November 1912.